We will be hosting a three month test championship of short challenges. There will be two challenges each month with 25 points available for each challenge. At the end the person with the most points across the championship will be crowned the winner and have ultimate bragging rights. 💪

The challenges will be:

Each challenge will award points from 1st to 5th place. If you can’t make every challenge it will not rule you out from winning the championship, if you do well enough in the ones you can participate in you could still be victorious. Good luck to everyone! 👑

Plundering of the Ancient World

Choose either to be an 🧭 Adventurer or a ⚔️ Temple Guard!

Temple Guard
It is your task to create a ruin, which you have to fill with all kinds of traps and puzzles. You are not bound to a build style, you can create any kind of ruin in any style. A crashed spaceship, a steampunk castle or even a magical elf tree, everything is allowed as long as it is decayed and dangerous!

Adventurer
You travel the globe (or even the universe) on a treasure hunt. You will be responsible to build an impressive vehicle that carries you on your adventures, or a base of operation where you store all of the rare artifacts you have plundered (these could be one in the same, as in a mobile base of operation).You can build whatever you like be it airships, boats, submarines, tree houses, mansion/museum or even giant wandering turtles with outhouses on their backs are welcome on the great treasure hunt. 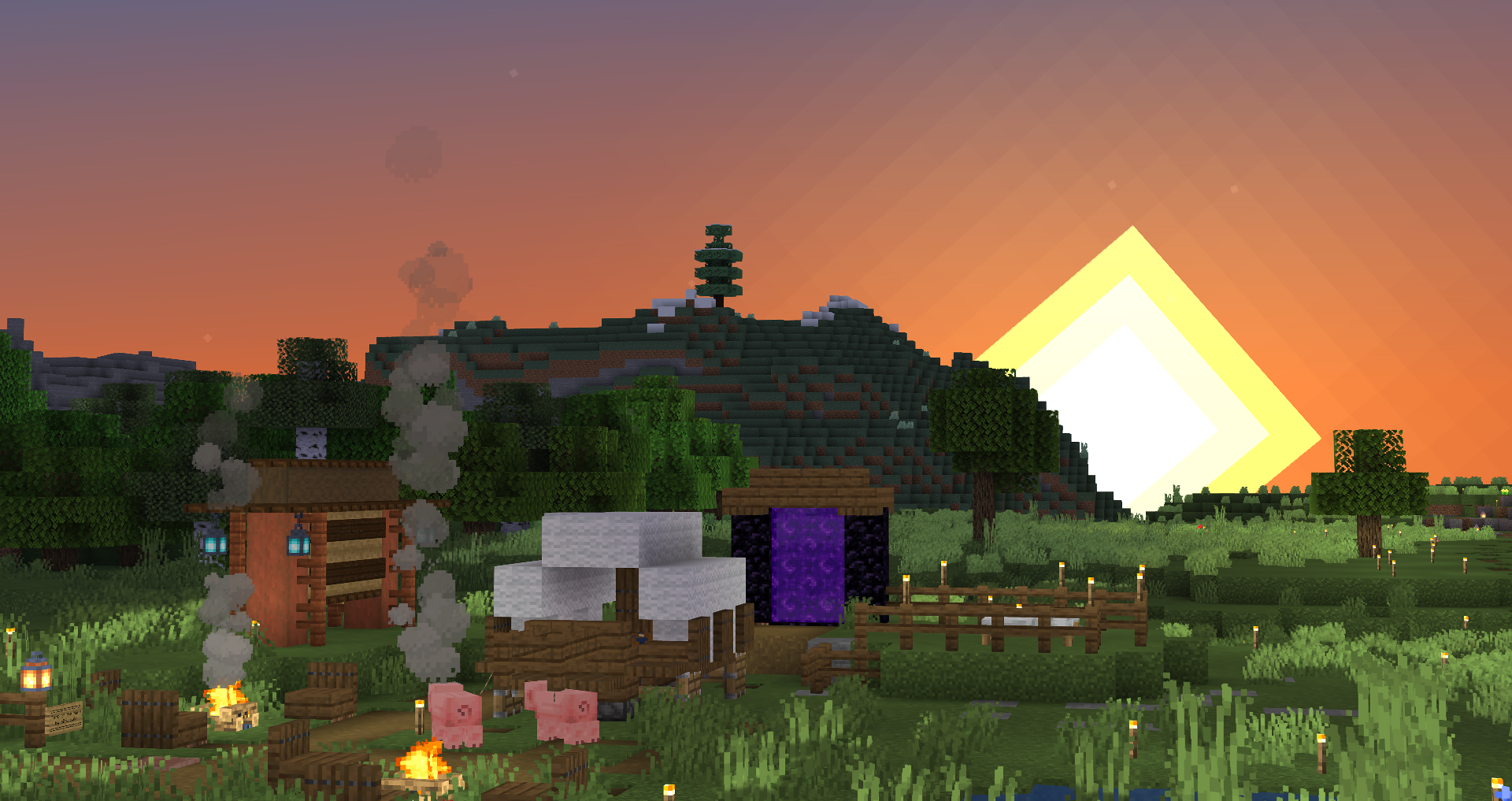 A Wizard Rage: The Redstone Revolution

Long ago, a great guild of wizards ruled the land. They held all the power and ruled without mercy. The people of the land lived in constant fear of upsetting the wizards for doing so would surely mean death, or worse. The wizards were known to be very creative with their punishments, sometimes making them last a lifetime, be it agonizing pain or humiliating servitude.

After hundreds of years of living like this, one woman decided enough was enough and set out to invent a way to overthrow the wizards. She worked tirelessly her entire life searching for a way to fight the wizards. Finally after years of searching, by chance she noticed that a worthless stone used to make trinkets for children held a strange force and that by striking the stone you could create great surges of power. She had discovered Redstone. News of the discovery spread fast and it wasn’t long until people were able to harness this energy and create tools. More than tools, the people learned to make weapons that rivaled the power of the wizards.

After years of bloody battle and losses on both sides, the wizards grew fearful of a full attack on the island home of their guild. Wizards were recalled from all over the cube to defend the guild. Even with all wizards present to defend, the power of the Redstone Army was too great. As a last resort, the wizards took to the skies, ripping the islands that made up the guild out of the ocean and into the air. The Redstone Army knew of the Wizards ability to fly and had planned for this. They had invented ways to make their war machines fly as well, and were able to chase the Wizards into the air.

It is your job to take on the role of a Wizard or Redstone Revolutionary and build either a flying island or flying war machine. The building area is the ocean surrounding the old ‘Shooting Star' Guild to the west of spawn. Get creative with 🧙‍ magic or 🧭 redstone! 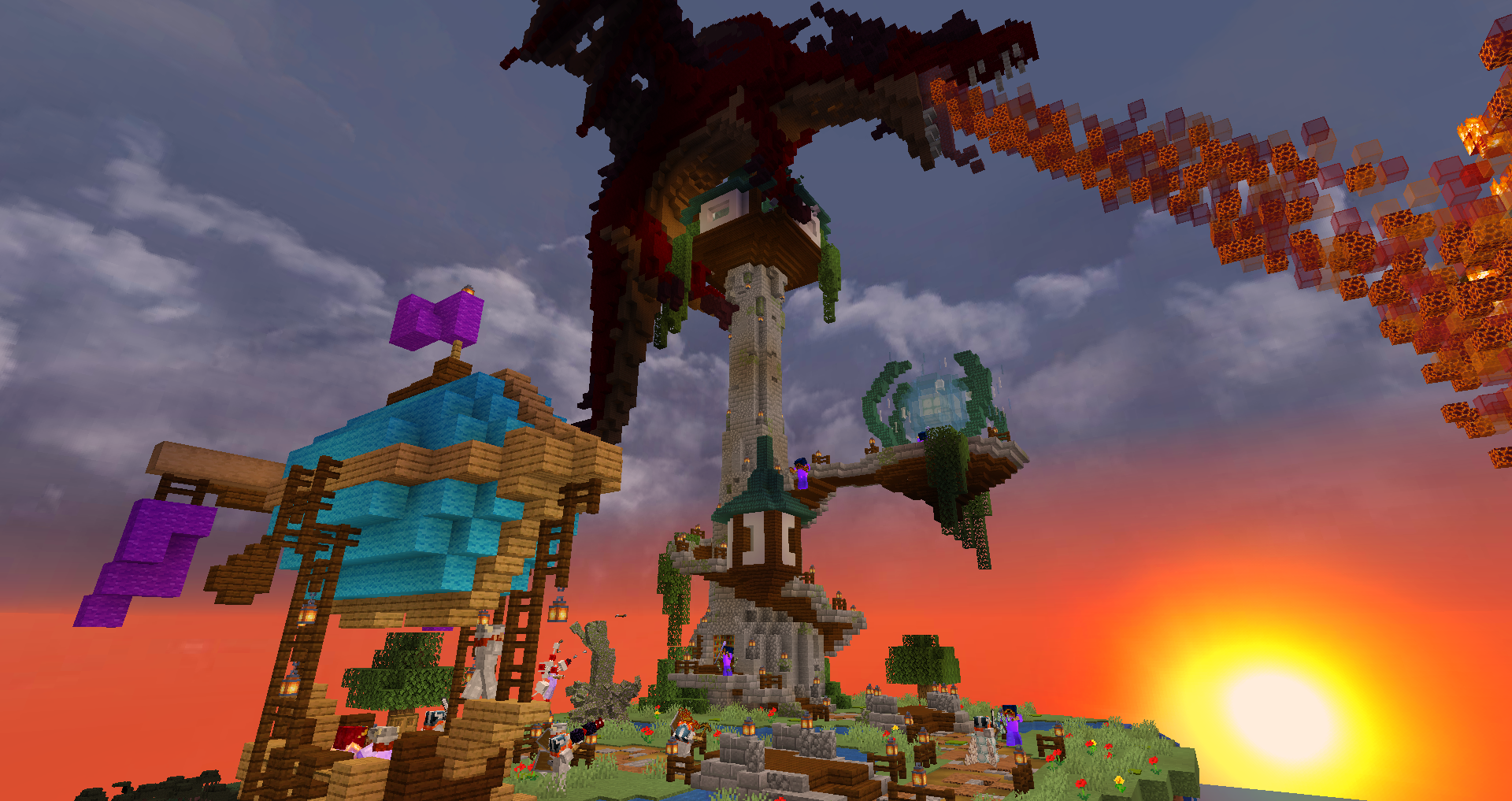 Scattered around the world (within 7000 blocks of Spawn) you'll find 20 different locations that contain a Loot Crate & a Ticket Barrel. There's 20 tickets in total and if you collect them all you'll be eligible to claim a special Easter Trophy Helmet. It's time to work together! At Spawn you'll find a big notice board with 20 free signs on it. When you find the location of a Ticket Barrel, please head to Spawn and write down the coords on a sign so others can then head to the location to claim their own ticket. 🐰 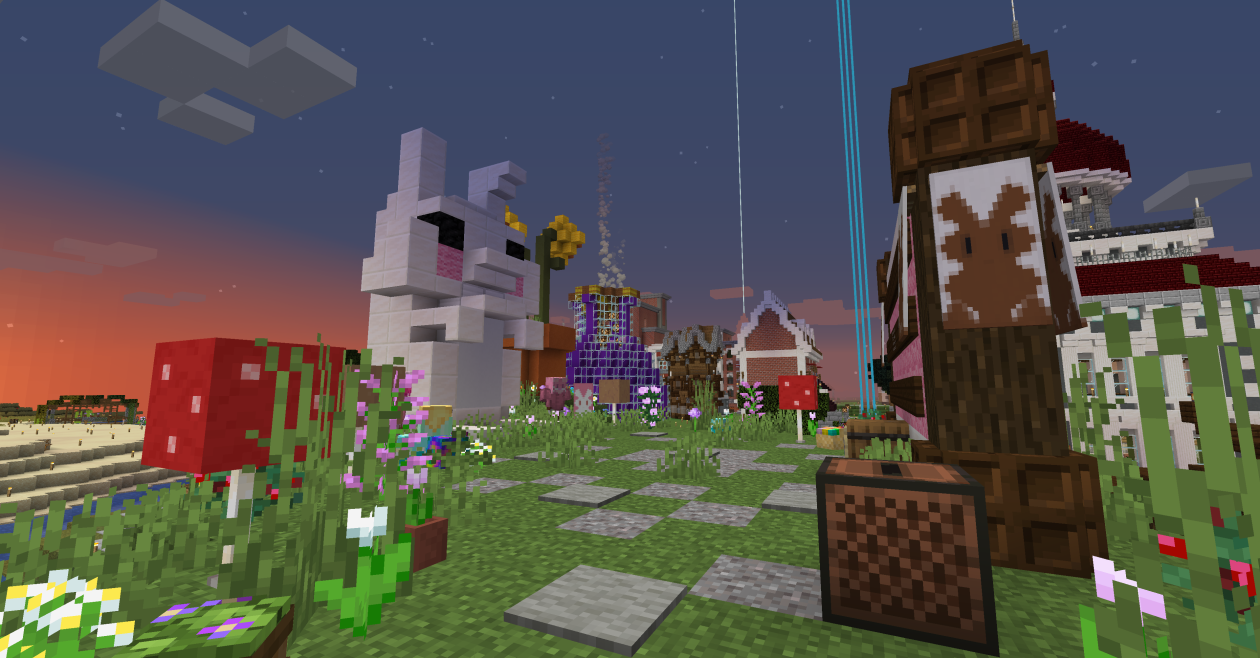 This is an ultimate Minecraft challenge consisting of a set of 5 mini games. Tree players per weekly game will be tested for various skills in Minecraft at the Gamshow Arena. With custom resource (music) pack the stakes are very high! Who would be the best and take the Retro Gameshow Trophy home? Come watch as an audience and cheer for your favorites! 🥇

• Trivia Night – Buzz as first and answer the Minecraft trivia question correctly. The first person with 3 good answers wins the game. (The buzzers detect presses with an accuracy of 0.5 sec, if two people click at the same time, the responder is drawn randomly. Incorrect answer gives other players a chance to respond)
• Shopping cart – Search for specific items in unorganized storage. There will be 5 different items (rounds). In each round be the quickest to find the item in chests and put it in your cart. (If 2 players have the highest number of items at the end, there will be an additional round for these players. No points are given if wrong item is chosen)
• DIY session – It’s crafting time! At the start you get materials with which you have to create as many items as possible. You have 60sec to do it! Player with most items at the end wins. (You can use recipe book if you want. Items are counted by type, not by quantity. For example: 4 sticks, 1 button and 2 planks = 3 unique items)
• Ctrl+C, Ctrl+V – Reconstruct the build in the middle and be the first one to do it correctly. All building supplies with tools and scaffolding are provided. When finished ring the bell. (The rotation of the build is not important, it cannot be mirrored though! If someone finishes don’t give up on your build, it may turn out that your building is correct)
• Cleaning time – Get your tools and start clearing all the nasty blocks. First player to clean everything and ring the bell wins the game. (You don't need to pick up or recover blocks, use correct tool to mine/break the block quicker) 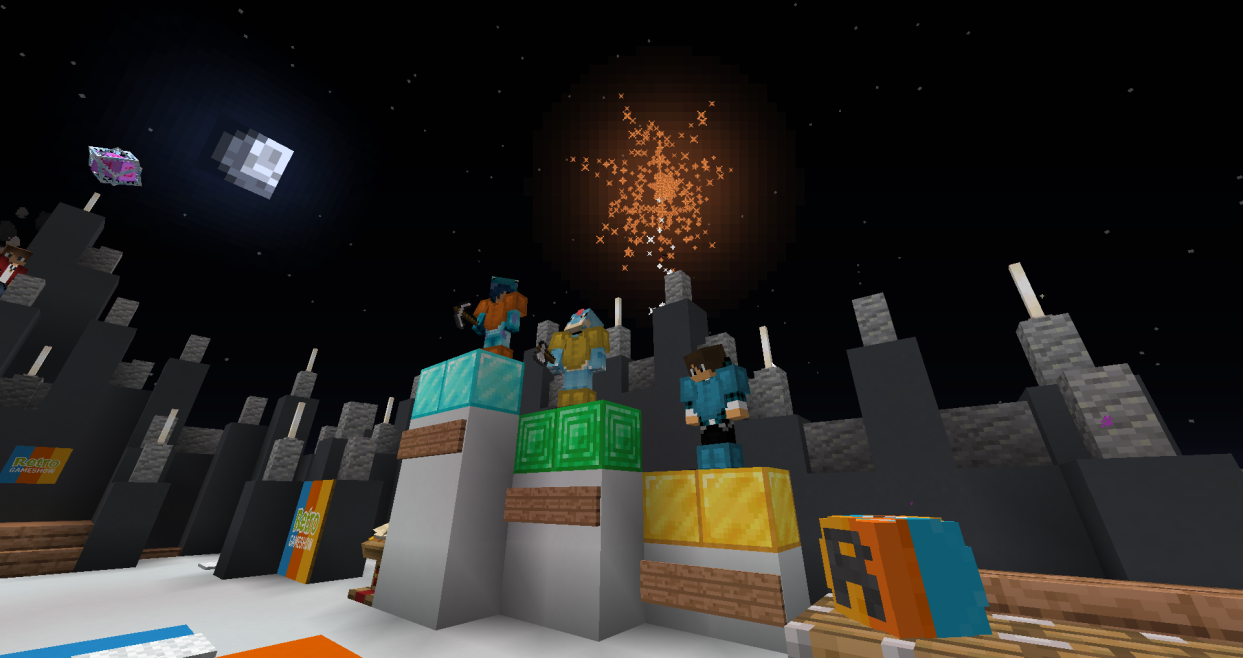 The snow has melted and it is time for another contest! This one is going to be a little bit different than the last one, instead of creating your own build I challenge you to make the best version of the same build. All entrants will be given a Row House (or town house if you prefer) in spawn. All of the houses are identically built out of stone with an empty interior and sad little garden. It will be your job to update this house with new blocks to make it as beautiful or cool as possible with out changing the basic shape. 🏬 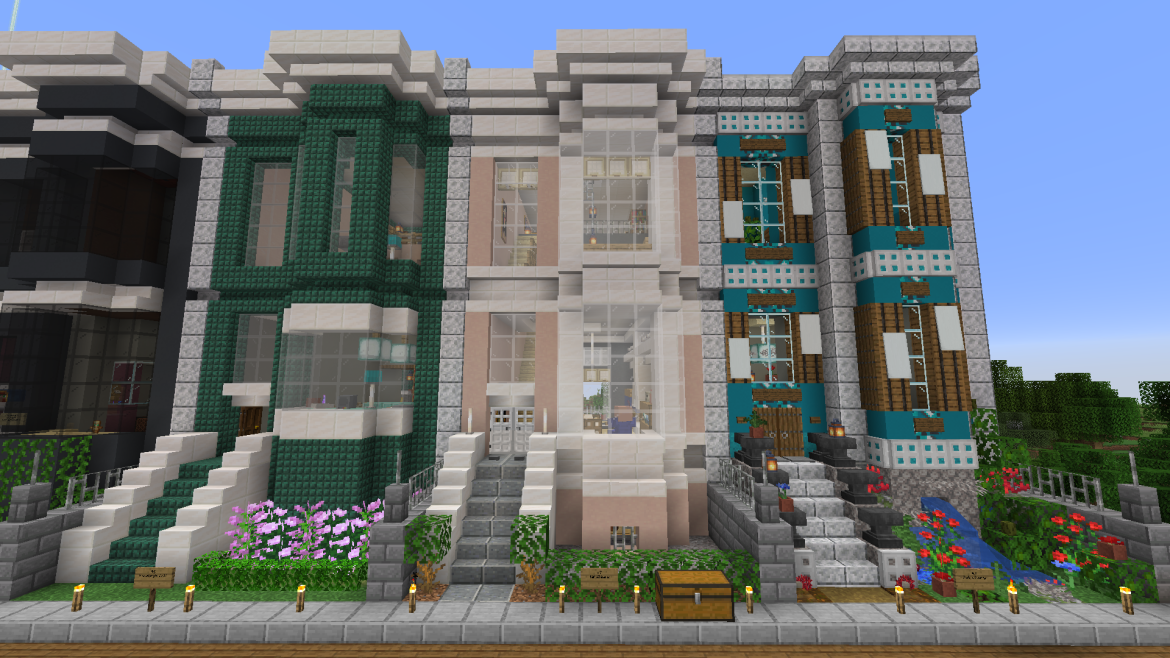 Ho, ho, ho! Come up with your best Christmas and Winter themed builds and get them ready in time for 25 Dec. Any builds are welcome as long as they fit the festive theme. 10 diamond entry fee and a lot of diamonds to win! Let's get into Christmas spirit and also prepare some gifts for each other. Santa Gift Exchange is happening under our decorated Christmas tree. 🎄 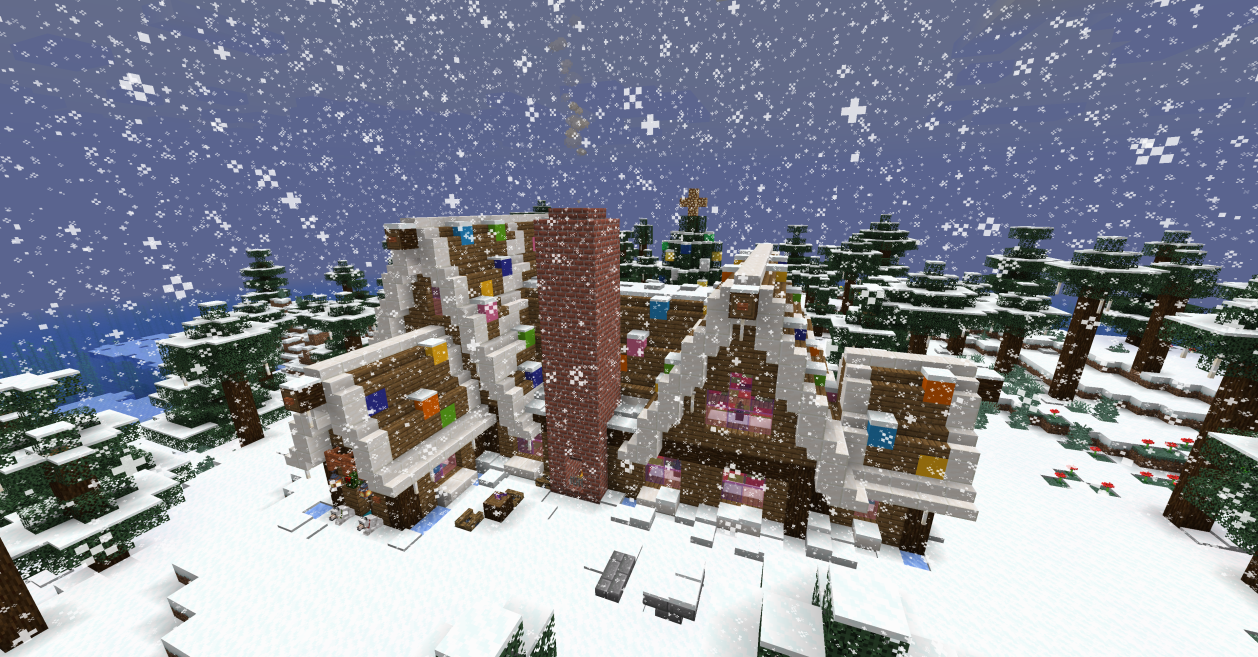 Minecraft world can be scary! Let's celebrate Halloween with a themed building contest. Whether it's a spooky castle or an action packed diorama, as long as it's at least loosely Halloween-themed you'll have the chance to win! No entry fee required. Diamonds and trophies are up for grabs. Bad luck! 🎃 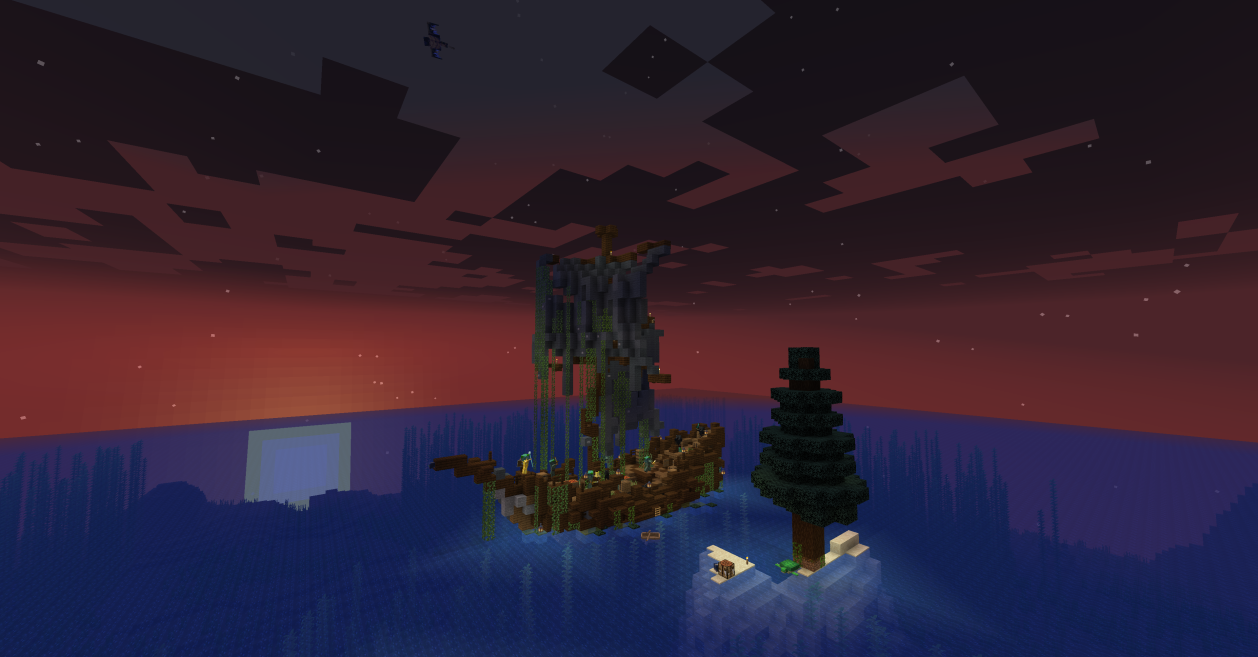